Half-baked tethering from RadioTime and BMW 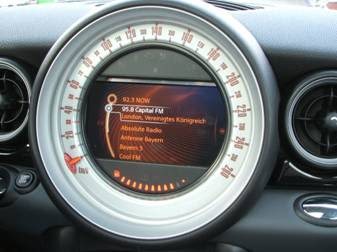 (image from Wired.com)
OK, so by now you know me. Internet radio in the car is my passion. However, I am also pretty busy and way too practical. I still drive the 2002 PT Cruiser I bought in December 2001 because it runs just fine, thank you very much. (Let's forget about the fact that it needed a new transmission after only 36,000 miles ... ) The result of this practicality is that when I get in the car, I generally just sit down and go. Even though it would only add less than a minute to my departure, most times I don't take the time to get out my iPhone and connect it to the iPod adapter. It is far easier for me to just hit the power button on the radio and listen to our local NPR affiliate, KPCC, so that's what usually happens.

If I, someone who is really motivated to get Internet radio in the car, don't take the time, should we expect others to do the same? Well, when I check around I find that I am not alone in this behavior. People want convenience and will generally take the easy path.

So, now we get to the RadioTime announcement. What bills itself to be an innovation and a "first" is just another half baked attempt to put Internet radio into the car. Similar to the Pioneer AVIC announcement with Pandora earlier this year, users can connect their iPhone to the car and use the Mini's dashboard controls to tune Internet radio. While both solutions do have the benefit of using the in-dash controls to access Internet radio, helping usability, they still fail because they require the user to connect their iPhone. Just like impressions on the second page of Google search results or clicks below the fold, the drop off rate on usage due to this requirement will be huge. People will do it the first couple weeks, but then they will forget one time, then another time, and soon the feature will go unused. Then the iPhone connector in the car will get old and will not be compatible with their new iPhone for next year. The net result will be that they wasted their money buying a feature that they only enjoyed for a couple weeks.

As such, until Internet radio is truly integrated into the dash, it will not take the place of FM radio or even satellite radio in the car. Integration doesn't mean just controls. It means controls and connectivity. It has to be truly built in and "just work."

Until you can sit down, power on, drive off, and enjoy your favorite Internet radio, it isn't viable competition for the user's time in the car.
Posted by David Frerichs

This isn't an aftermarket head unit. And it's not a single music service, but actual radio from 140 countries.

Younger drivers would rather bring their own data plan, thank you (their phone).

Older ones are more open to paying more for an integrated connection.

Soon enough you'll have a broad set of options, tethered and not.

Bill, thanks for the comment. Making an educated guess at your identity, though, ( :-) ) I think I have to discount your position a bit as an interested party.

Sat radio has proven (whether we like it or not) that about ~20M (young and old) are willing to pay ~$10/month to get non-FM radio in the car. If we couple Internet radio with other Internet capabilities, the ceiling easily goes to $20/month for dedicated data services for the car. Your comments are based on the current market, not the coming market. 2012 will be a very different data pricing landscape than 2010. The idea that all roads will lead to a single modem is an artifact of the current environment that will quickly change with multi-SIM data plans and family data plans. Folks, including your company, are taking a tethered approach now because that is what can be delivered economically today. Fair enough.

My point isn't that such solutions are bad. Rather, I am saying such a solution is not a mass market solution. It is a stop gap that has fad appeal but will not sustain the interest of folks that buy it.

David, sorry if I wasn't clear -- this is Bill Moore, I'm Founder/CEO of RadioTime, so completely biased :)

The BMW solution announced is a mass market option.

Radio listening on mobile phones has gone from zero to mass market in two years -- now bigger than satellite radio. RadioTime tracks GPS reported with tuning so can see mobile radio listening is often in the car.

When given a choice, most listeners spend more time with real radio than music services. Radio isn't a fad.

After a decade and billions in capital spending, satellite radio is in trouble. Churn remains high because users want free radio.

How long will your iPhone connector keep working? It's outlasted my Sirius subscription.

I agree AM/FM is hard to beat. Especially when you live in LA with KCRW and an exciting local radio market.

How many satellite radio listeners are outside of markets like LA and/or distance drivers?

To save $150 per year and/or listen beyond the local dial, will users plug in a connector? How many car iPhone connectors are installed? It's not a fad or half-baked.

Love to hear more about internet radio in cars. I've worked with indie record stores for years and tried to get them pumped about internet radio as a way to promote new music and the really good indie stores that are left out there. But I didn't have much luck. Well I saw the writing on the wall when I got my iPhone and could plug it into my wife's Honda fit. I even told some folks that that had satellite radio that internet radio would over take satellite radio once it could be installed in cars. Plus you have thousands of channels to choose from not a 100 or so. AND THEY ARE FREE!
Ken Fehner
www.indiestoreradio.com

I still think you are missing my point. Just like page views drop off on page two search results, usage rates will drop off dramatically with the need to dock. It is a huge usability issue. This has nothing to do with RadioTime's service, it has to do with the integration method. Also, I didn't say that radio is a fad. (If I felt that way, why would I write this blog!) Radio is huge and will get even more important as Internet radio gets more traction in the car. What I am saying is tethering is not a path to mass market adoption. It is a stop-gap measure.

Anyway, I guess we can agree to disagree. :-) I welcome the feedback and the discussion!

hey guys..
i have been working with internet in cars for about 2 years now. i am currently working on ip radio and streaming tv into vehicles(on my own/grass roots). so far so good..
watch out sirius/xm

I hadn't really thought about internet radio in a car until reading your post. What a great idea. It's got to be the way forward with in-car entertainment.

I am the owner of www.spiritquestradio.com, soon to be sqr.fm. I am so eager and excited to one day see or hear internet radio in the cars!! Ill keep watching your blog. Jeep up the passion. Holly Hall

I'm a undergraduate student and I read your article.I would like to develop a portable IP smart radio system. what will be the acceptable market price to this product? because my plan should adequate with this public ideas.

Kajenthiran, that really depends on the feature set. The key point is to remember that you are competing against phones for this kind of functionality.

For a WiFi only, dedicated Internet radio product, it really needs to be sub $99 retail (> $50 COGS) to be interesting. You would need to support HE AAC and MP3 streaming over ICY/HTTP at a minimum. If you get such a product running, please let me know!

Internet radios in cars would be brilliant, but obviously you have to remeber you need a 100% all round net connection and if you have ever tried to use 3g web on your mobile in the car you will see you soon are waving your arm around to find signal.

Its a step in the right direction and great for internet radios but i think its along way off before bbc radio 1 will be worried.

What about this blogg, Is internet radio dead ?

New transmission after 36000 that must have hurt!