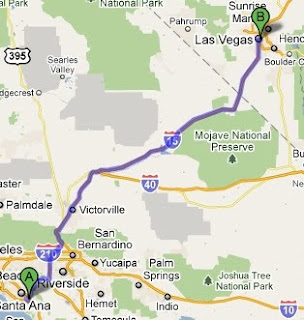 For the fourth year in a row, I tested the consumer viability of Internet radio in the car during my drive from the LA area to Las Vegas for CES. As before, I tuned into Radio Paradise via Tuner2 on an iPhone (over AT&T of course, this being early 2011 and all). And unlike previous years, instead of timidly connecting to the 24Kbps stream, I set it to 64Kbps and let it run.

The result was... success!

I enjoyed my music with only a minor hiccup cresting the Halloran summit. Even the canyon area dropping towards the NV border was solid. This milestone marked the start of what will clearly be the year of Internet radio in the car. Toyota finally went public with Entune (more on that in a future post), and a whole boatload of car makers were at CES showing their connected drive wares.

But what about the death of "unlimited" data, you say? The truth is that it was never alive. If you had read the fine print of all your previous plans (regardless of carrier), they capped out at 5GB, meaning that if you exceeded the 5GB limit, then they will either throttle you drastically or cut you off. Now, to get to the pricepoints that people want, they are offering 2GB (nearly everyone with the Samsung Galaxy Tab) and now even 1GB plans (iPad on Verizon) to give you data-only access without paying an arm and a leg.

The reality is that if someone uses Internet radio (32Kbps) in their car to the same level that they currently use broadcast radio in their car, the average monthly usage for Internet radio will be somewhere around 800MB, most likely well below the tolerance threshold in the models used to price the 2GB plans. (It would throw off the "average" weighting the carriers use to price the 1GB plans, though.)

So fire up those connected tablets, dock those phones to your dashboard, Internet radio in the car is upon you!
Posted by David Frerichs

Is 64k an acceptable bitrate for Complex audio, more higher bit rate streams are becoming available right up to 320kbps, AOL has a lot of streams around 320 now, heavy on the data plan I know but sounds great on a good system.

Hey buddy, I am fascinated by your work. Power to you. I have been trying to use Internet radio in my car here in India for a few months now, rather unsuccessfully. The reception is choppy and breaks often while on the move. This is despite some decent speed 3G connections available. I have tried using my Nokia smartphone's in-built radio app, as well as Livio on my iPad. Just trying to gather if there's a better way. Perhaps you can help.

How to set up cox email on iPhone said...

If you are a Cox Gmail then you might know about the common How to set up cox email on iphone error problems. The best Cox email customer support phone number for Gmail Problems for the USA and Canada people +1-888-857-5055 or visit. Feel free to call us at any time as we are 24/7 available to assist you. The steps for setting up Cox mail on the system are detailed in this blog. You can do all things manually after applying this troubleshooting Click Here for know How to set up cox email on iphone
.