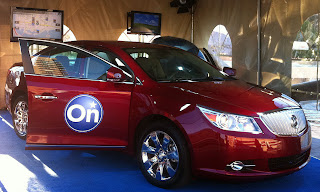 In February, at TED 2011 in Long Beach, OnStar expanded the capabilities of their concept car to include a feature called "MyNetwork." This system, which leverages the Pioneer Platform for the Aggregation of Internet Services, lets the driver use voice control to do things like find the location of their Facebook and Twitter friends in the real world, discover a new restaurant or other business, publish directions to that place on their status wall, check out what Internet radio stations other drivers are listening to, and send a station to their friend. 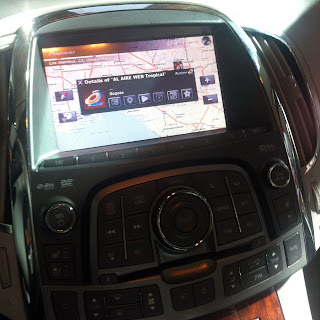 It's a compelling mashup that shows how thinking beyond app-by-app can create a compelling and safe Internet experience in the car. Of course, though, we are a bit biased since MyNetwork featured Tuner2 as the Internet radio service, including the TunerMap functionality. Even so, the Media Tuners team has been working on Internet radio in devices since 1999 (!), so it is very gratifying to see that someone is finally taking the concept beyond the simple replication of existing service and deciding to put a new an innovative twist on Internet radio in the car. Just like each radio network shouldn't live alone in their own "app", Internet radio itself shouldn't live alone as a separate "app." It should be part of an integrated experience that takes advantage of the unique requirements of a driver heading down the road.
Posted by David Frerichs

So this component dos not need some kind of bluetooth connection with a smartphone to gain some internet radio tune? As I understand this component is connected to internet without a phone or am I wrong?

AWESOME! NOW DURING THE TIME SPAN SPENT IN MY VEHICLE I CAN TWEET, POKE FRIENDS, AND LISTEN TO INTERNET RADIO WHILE SIPPING MY STARBUCKS VENTI ICE MOCHA,YELLING AT MY GPS DEVICE AND CARESSING THE IPAD ON MY LAP. THIS WILL AMOUNT TO AN INSANE INCREASE IN MY PRODUCTIVITY AND SOCIAL LIFESTYLE (WHO BOTHERS PAYING ATTENTION TO DRIVING ANYWAY?)

Hi, I was simply checking out this blog and I really admire the premise of the article.

Thanks a lot for sharing this with all folks you really recognise what you are talking about! In this complex environment business need to present there company data in meaningful way.Sqiar (http://www.sqiar.com/solutions/technology/tableau/) which is in UK,provide services like Tableau and Data Warehousing etc .In these services sqiar experts convert company data into meaningful way.

Hi, I enjoy reading your site! Is it okay if you consider linking to my website on your page? Please email me back.

Technology has come so far it is crazy! I am in need of a new radio in my car because mine recently broke. This internet radio would be so great to have. My dad has one in his car and I love using it. http://www.westernmidland.com/

This is a great post. I like this topic.This site has lots of advantage. It helps me in many ways.Thanks for posting this again.